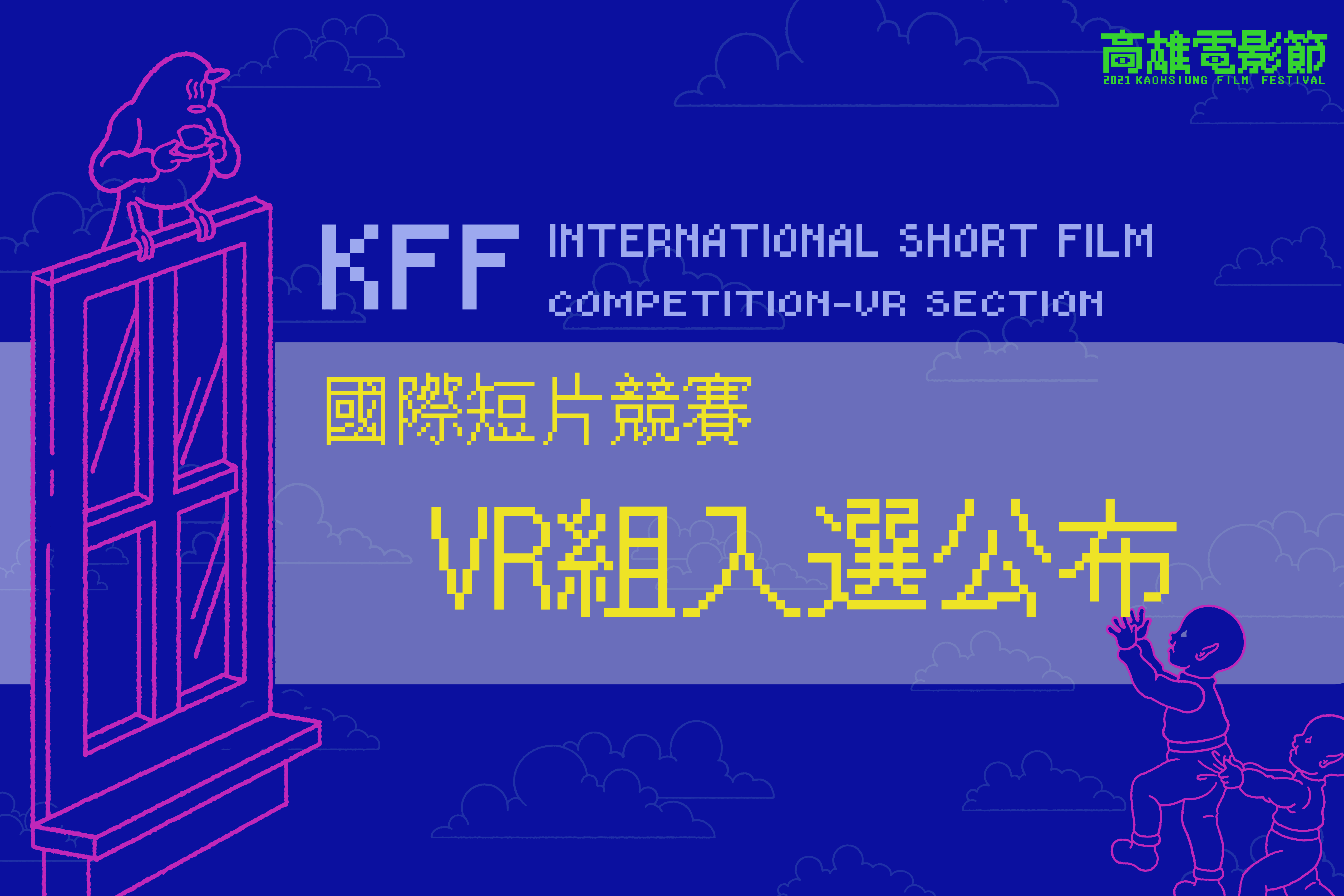 Kaohsiung Film Festival (KFF) announces the nomination for the VR section of the KFF International Short Film Competition. A total of 225 VR works from 36 countries are submitted to the competition, and 21 of them will compete for 4 awards (VR Golden Fireball Award, VR Immersive Award, VR 360 Award and VR Special Mention) with cash prize of 11,000 USD in total. After days of intense debate among the jury members, 21 works were selected, including two Taiwanese VR works. All the selected VR works will be judged by professionals jury members during the film festival and the winners will be announced on 24 October. For the first time, 2021 KFF XR Dreamland launches the “XR Dreamland Virtual” and “VR Headset Rental Package,” which allows local and international audiences to experience the charm of virtual reality and the selection of KFF XR Dreamland without geographic restrictions.

The KFF VR Competition is entering its fourth year, and many of the finalists have been recognized by iconic international film festivals, such as Cannes Film Festival and Venice Film Festival and more. The forms of these works include VR360, interactive, VR concerts, and “VR Live Performance” which allow multiple people to connect and participate in the performance together in different locations.

The number of submissions since 2018 shows that the pandemic has not deterred the creation of VR works. . Instead, it has facilitated the expansion of immersive creative approaches. The widespread use of the real-time “VR Live Performance” has also contributed to the gradual formation of the Metaverse, a virtual reality social technology which brings audiences and actors to meet in a VR world and interact in real time. It also allows actors to transcend the limit of time and space and perform together. The jury members were amazed by the sophistication and maturity of this year’s submissions. After days of heated debate, they decided to increase the number of the finalists to allow more outstanding works to compete for the awards, opening the eyes of the audiences and the creators alike.

In the Mist / LIMBOTOPIA in VR

The two selected works from Taiwan are “In the Mist” by new media artist CHOU Tung-Yen and “LIMBOTOPIA in VR“, the graduation project of HSIEH Wen-Yee and Co-Creator CHENG Chun-Lien from Feng Chia University. “In the Mist” depicts the nature and life of gay saunas with poetic camera language, and the tickets to its premiere at the 2020 KFF were instant sell-outs. Moreover, it was selected for the Special Event-Out of Competition at the 2021 Venice Film Festival. “LIMBOTOPIA in VR” blurs the boundary between the real and the imaginary, as the audience becomes a traveler reborn after death, following the signal from under the ground to Limbotopia.

“In the Land of the Flabby Schnook” transforms children’s imagination into brave and fearless superpowers, allowing the audience to follow a sister and a brother on a big adventure in the dark world. “Recoding Entropia” transforms solid metal into air and gas into liquid, questioning the meaning of human existence in the infinite fragmentation and reorganization of matter. “Strands of Mind” employs superb CG animation technology and sound effects to transform human thoughts into the branches of trees in the forest, travelling through the dark world like lightning and fire.

VR takes the audience through a time and place they have never experienced before. “Noah’s Raft” puts viewers in Makoko, which is referred to as the “Venice of Africa,” a floating slum in Nigeria. In this place, the director records the vitality of the community in a panoramic way and finds hope for the poor children there. “Reeducated” combines illustrations with real-life interviews. In Kazakhstan, with journalist Ben Mauk , director Sam Wolson interviews three men from Xinjiang who survived the ordeal there. This work reveals the ghastly reality of the reeducation camp in Xinjiang with VR. “Replacements” won Cristal of the Best VR Work at the Annecy International Animation Film Festival 2021. It uses animation to depict the temporal changes somewhere of Jakarta from 1980 to 2020 and bears witness to the drastic transformation in the city over the past 40 years.

The Severance Theory: Welcome to Respite / Goliath: Playing with Reality

The special perspective of VR allows viewers to detach themselves from the established viewpoints and immerse themselves in a special environment and position to cultivate deep-rooted empathy. Two interactive VR works that explore mental illness are shortlisted. “The Severance Theory: Welcome to Respite” transforms the physical theater into an “VR Live Performance” which boasts online simultaneous multi-person experience. It leads us into the inner world of people with dissociative identity disorder and experience an immersive psychological thriller. Following the narration of Oscar-winning actress Tilda Swinton, “Goliath: Playing with Reality” gives us a glimpse into the disordered and confused mental state of a patient with psychosis and leads us to travel between illusion and reality to find a way to live with the world with him.

This year’s finalists include several interactive VR animation works, including “Baba Yaga”, which brings together the voices of Daisy Ridley from Star Wars, Kate Winslet, Glenn Close, and other A-list actors. It addresses the issue around rainforest development to find a balance between human and nature through a Russian fairytale. “Madrid Noir” presents a classic film noir with smooth VR narrative and interactive techniques in exquisite animated scenes. “The Secret of Retropolis” is an interactive puzzle-solving work. It recreates the retro color of the adventure video games in the 1990s It is like the psychedelic mood of Blue Velvet mixing the futuristic and mechanical fantasy elements of Sin City and Metropolis. The audience will play the role of a private detective to find the truth and solve the case. “Paper Birds” is voiced by Archie Yates from Jojo Rabbit and Edward Norton from Fight Club. It is just like when Soul meets Coraline. It takes you to a heartwarming and dark fairytale journey which is about to begin. Japan’s Kodansha VR Lab has launched a virtual reality idol project since 2017. In “Hop Step Sing! VR Live”, just grab your glow sticks to cheer on and sing along with the three adorable virtual idols.

Marco & Polo Go Round / The Passengers: The Kid / Hush

“Marco & Polo Go Round” marks the first virtual reality production for Item 7, the film production team of “Brooklyn”. It turns the abstract changes in a romantic relationship into surreal scenes of weightlessness and disintegration. “The Passengers: The Kid” guides the audience into the hearts of different passengers in the train and listen to and peep into their memories. The audience can use gestures, eyes and voices to help these passengers make their life choices; “Hush” is inspired by the Danish mermaid mythology. The audience’s soul will be summoned by the songs to enter a dreamy and eerie underwater world.

Through the special perspective shift of interactive VR, we will be able to deliberate the boundary between good and evil. In “JAILBIRDS: Bwa Kayiman”, we will be put in a cold prison, where power and violence are secretly played out at the border of imagination and reality. “Bystanding: The Feingold” Syndrome recreates the scene of an Israeli rower’s accident in 2009, allowing the audience to listen to the voices of the bystanders at the time. Who would be brave enough to go forward or backward at the crossroads of instinct and choice? Inspired by Carl Sandburg’s poem of the same name, “The Hangman at Home – VR“ allows the audience to feel the awkwardness of being discovered and share a moment of unspeakable complicity with the characters.

The three jury members at the preliminary stage are HUNG Wei-Yao (president of Kingkongwave Production / theater director and actor), LEE Po-ting (executive director at Fablab Dynamic and Solid Memory) and WANG Teng-Chung (independent curator / founder of Samuel Production). The 2021 Kaohsiung Film Festival is scheduled to take place from 15 October to 31 October. The KFF will host the “XR Dreamland Virtual” and provide the “VR Headset Rental Package” for the first time so that the audience can log in KFF XR Dreamland everywhere . The program and the events will be announced soon. Please follow the KFF official website, Instagram and Facebook for the most updated information.

The three jury members at the preliminary stage